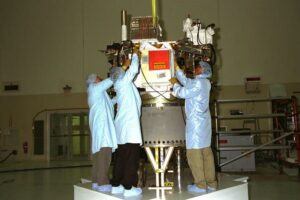 Location: Kennedy Space Center, FL
Workers from the Johns Hopkins University’s Applied Physics Laboratory (APL) install the Cosmic Ray Isotope Spectrometer (CRIS) on the Advanced Composition Explorer (ACE) spacecraft in KSC’s Spacecraft Assembly and Encapsulation Facility-2 (SAEF-2). From left, are Al Sadilek, Marcos Gonzalez and Cliff Willey. CRIS is one of nine instruments on ACE, which will investigate the origin and evolution of solar phenomenon, the formation of the solar corona, solar flares and the acceleration of the solar wind. ACE was developed for NASA by the APL. The spacecraft is scheduled to be launched Aug. 21 aboard a two-stage Delta II 7920-8 rocket from Space Launch Complex 17, Pad A