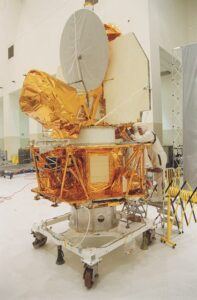 Location: Kennedy Space Center, FL
KENNEDY SPACE CENTER, FLA. — In the Spacecraft Assembly and Encapsulation Facility 2, the Microwave Anisotropy Probe (MAP) undergoes testing and checkout. Several milestones must be completed while MAP is at SAEF-2, including antenna and solar array installation, solar array deployment and illumination testing, a spacecraft comprehensive performance test, fueling with hydrazine propellant and a spin balance test. MAP will then be ready for integration with the solid propellant Payload Assist Module upper stage booster. MAP is scheduled for launch June 30 from Cape Canaveral Air Force Station on a Delta II rocket into a lunar-assisted trajectory to the Sun-Earth for a 27-month mission. The MAP instrument consists of a set of passively cooled microwave radiometers with 1.4x 1.6-meter diameter primary reflectors to provide the desired angular resolution. MAP measures small fluctuations in the temperature of the cosmic microwave background radiation to an accuracy of one millionth of a degree These measurements should reveal the size, matter content, age, geometry and fate of the universe. They will also reveal the primordial structure that grew to form galaxies and will test ideas about the origins of these primordial structures. The MAP instrument will be continuously shaded from the Sun, Earth, and Moon by the spacecraft. It is a product of Goddard Space Flight Center in partnership with Princeton University