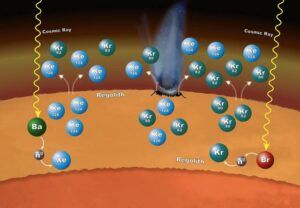 Chemistry that takes place in the surface material on Mars can explain why particular xenon (Xe) and krypton (Kr) isotopes are more abundant in the Martian atmosphere than expected. The isotopes — variants that have different numbers of neutrons — are formed in the loose rocks and material that make up the regolith — the surface layer down to solid rock. The chemistry begins when cosmic rays penetrate into the surface material. If the cosmic rays strike an atom of barium (Ba), the barium can lose one or more of its neutrons (n0). Atoms of xenon can pick up some of those neutrons â€“ a process called neutron capture â€“ to form the isotopes xenon-124 and xenon-126. In the same way, atoms of bromine (Br) can lose some of their neutrons to krypton, leading to the formation of krypton-80 and krypton-82 isotopes. These isotopes can enter the atmosphere when the regolith is disturbed by impacts and abrasion, allowing gas to escape. http://photojournal.jpl.nasa.gov/catalog/PIA20847