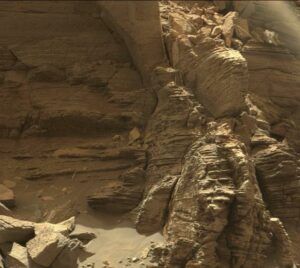 This view from the Mast Camera (Mastcam) in NASA’s Curiosity Mars rover shows an outcrop with finely layered rocks within the “Murray Buttes” region on lower Mount Sharp. The buttes and mesas rising above the surface in this area are eroded remnants of ancient sandstone that originated when winds deposited sand after lower Mount Sharp had formed. Curiosity closely examined that layer — called the “Stimson formation” — during the first half of 2016, while crossing a feature called “Naukluft Plateau” between two exposures of the Murray formation. The layering within the sandstone is called “cross-bedding” and indicates that the sandstone was deposited by wind as migrating sand dunes. The image was taken on Sept. 8, 2016, during the 1454th Martian day, or sol, of Curiosity’s work on Mars. http://photojournal.jpl.nasa.gov/catalog/PIA21044