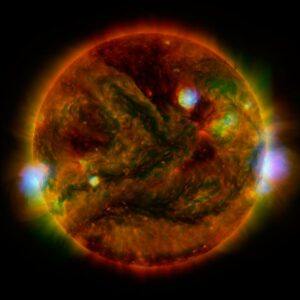 Flaring, active regions of our sun are highlighted in this image combining observations from several telescopes. High-energy X-rays from NASA’s Nuclear Spectroscopic Telescope Array (NuSTAR) are shown in blue; low-energy X-rays from Japan’s Hinode spacecraft are green; and extreme ultraviolet light from NASA’s Solar Dynamics Observatory (SDO) is yellow and red. All three telescopes captured their solar images around the same time on April 29, 2015. The NuSTAR image is a mosaic made from combining smaller images. The active regions across the sun’s surface contain material heated to several millions of degrees. The blue-white areas showing the NuSTAR data pinpoint the most energetic spots. During the observations, microflares went off, which are smaller versions of the larger flares that also erupt from the sun’s surface. The microflares rapidly release energy and heat the material in the active regions. NuSTAR typically stares deeper into the cosmos to observe X-rays from supernovas, black holes and other extreme objects. But it can also look safely at the sun and capture images of its high-energy X-rays with more sensitivity than before. Scientists plan to continue to study the sun with NuSTAR to learn more about microflares, as well as hypothesized nanoflares, which are even smaller. In this image, the NuSTAR data shows X-rays with energies between 2 and 6 kiloelectron volts; the Hinode data, which is from the X-ray Telescope instrument, has energies of 0.2 to 2.4 kiloelectron volts; and the Solar Dynamics Observatory data, taken using the Atmospheric Imaging Assembly instrument, shows extreme ultraviolet light with wavelengths of 171 and 193 Angstroms. Note the green Hinode image frame edge does not extend as far as the SDO ultraviolet image, resulting in the green portion of the image being truncated on the right and left sides. http://photojournal.jpl.nasa.gov/catalog/PIA19821